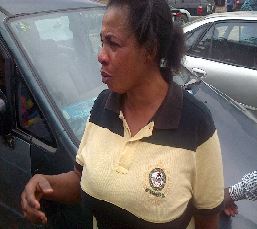 A widow alongside some criminals were arrested for allegedly recruiting young girls(students) in secondary school into prostitution at Sunderland hotel, Ikate area, Surulere.


The suspect, identified as Chinonso Okolokwo, said she's a commercial sex worker at this hotel.

The Commissioner of Police, Lagos state command, Mr Fatai Owoseni, disclosed the suspects method was to lure young girls from different secondary schools around Surulere during school hours to the hotel. She would then give the girls clothes to change into and use them as her sex slaves until school closing hours.

It was gathered that these girls would be sent home with between #1000 and #2000, depending on the number of men they serviced, but it was learned later on, that this amount, was just 10% of what the male customers paid, while the rest was allegedly kept by the managers, among which is Okolokwo.

Speaking to Vanguard, the suspect, Okolokwo, from Ebonyi state, contradicted the allegations made against her, stating that she is a hustler at Sunderland hotel, and she started prostitution 11years ago, when her husband died, so as to provide for herself and her two living children.

She said the police raided the hotel and arrested her but she's not connected with what they alleged, stating also, that many girls from Abuja and all over Nigeria, come to this same hotel to hustle.

The CP, Mr. Owoseni, said there's still an ongoing investigation to determine whether there's a collaboration between the hotel management, the schools authorities, the suspect and her cohorts.

If these allegations are true, then that Miss Okolokwo is a wicked woman. How would you pay those girls between N1,000 - N2,000, after sleeping with different men. Did she even ensure the girls safety from physical harm as well as STDs from the male customers?

The schools should be thoroughly investigated because I don't understand how students would be missing from school for days without the teachers and heads of each school not knowing about this. Didn't they try to contact the parents or guardians, to confirm that the students weren't sick, or even dead.

The hotel must also be in collaboration with Okolokwo, as they should be aware that there were female students - girls meant to be in school- during school hours in their hotel. They can't say they don't have cameras to monitor the people coming into their hotel.

Source
Vanguard
Posted by Ootega at 08:56:00
Email ThisBlogThis!Share to TwitterShare to FacebookShare to Pinterest