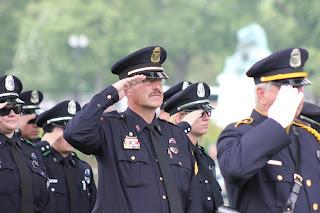 11 police officers shot and 5 officers dead by ambush style sniper attack in Dallas Thursday night, during the Dallas peaceful protest against the recent police shootings of two black men, Alton Sterling and Philando Castile in Louisiana and Minnesota respectively, according to Dallas PD.


According to Dallas Police, some of the officers were shot in the back and a civilian was wounded. One suspect was already in custody while another suspect, a person of interest they were searching for, has turned himself to the Dallas PD. A suspicious package was discovered near the location of one of the suspects that's in custody, and this package is being secured by DPD bomb sqaud.

It's sad that there has to be another shooting involved to get "justice" for the two black men killed by police, but murder for murder isn't the solution. We should let the justice system take control of these cases and pray that there's no foul play in the ruling of these cases.

I am surprised at how fast they have apprehended these suspects, meanwhile the police officers who killed the two black men, were there have been video recordings to prove this fact, haven't been apprehended, instead they are on "administrative leave", free to move about in their community.

I hope that this event doesn't shift focus from the ongoing investigation of the police officers involved in the recent black men shootings. I also pray that the justice system in Dallas gives a fair and impartial judgement to the sniper shooters, of which one of the suspects is black and am sure the other one may be black too.

Let's allow the justice system to do their work. Too many people have died within 3 days, let's have a peaceful weekend.


Posted by Ootega at 07:55:00
Email ThisBlogThis!Share to TwitterShare to FacebookShare to Pinterest